Given the amount of scepticism directed at the contemporary art world, maybe it wasn’t such a great idea for the title of the premiere exhibition at the new and very hyped home of Toronto’s Museum of Contemporary Art to be a play on words that highlights the “lie” in the middle of “believe.” South African artist Kendell Geers’ titular text piece emphasizes the fiction at the core of every belief system. That accusation of fabrication can refer to art or deception (or both). It’s ostensibly directed towards religious and political structures that have endured throughout history, but it could just as easily apply to the personal and social investment we make in the arts. Be it the faith we have in the meaning of art or the assumptions we accept in the market for art, there is always an element of “make believe” that expands from artist to audience and beyond. 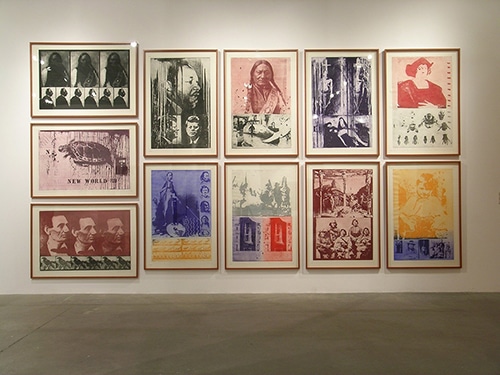 The uncertain status of the image is front and centre when you step out of the elevator on the second floor of the gallery and take in Carl Beam’s suite of found photographs wrenched from their historical contexts and arranged in pairings that interrogate their iconic status. In an exhibition that feels unquestionably of the moment, Beam’s decades-old art is prescient and perfect as an opening gambit. (However you choose to navigate the thesis of this curatorial endeavour, the blessed diversity of the artists included make it a statement of belief in its own right – one that reflects the real face of this city and a de-centred art world more than any group exhibition I’ve seen at a major local public institution basically ever.) What follows is a smorgasbord of works that link belief less to transcendence and religious institutions and more to material experience and our personal identity. 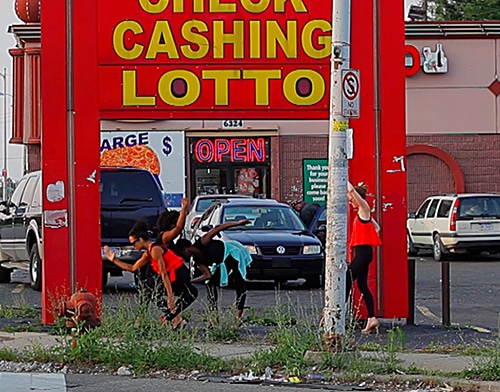 From Nep Sidhu’s collaboratively-created tapestry, pinball computer, and ritual costumes, to Dineo Seshee Bopape’s earthy, organic assemblage that dominates the third floor, a refreshing presence of sensually engaging stuff distinguishes this exhibition. Even the selection of video works, from Nikolaj Bendix Skyum Larsen’s documentary surveillance to Jeremy Shaw’s sci-fi found film, is rooted in human narratives and leave any abstracting conceptualism to the subtext. Transcendence, or leaving the world behind, is too often a means of perpetuating a depoliticized take on the nature of our being, one that functions in art and the church to remove us from the matter of our lives. If there’s a lie at the heart of BELIEVE, it’s the one that tries to mollify us into relinquishing our selves in service of an assumed greater good – maybe even the greatest good. There’s none of that here. Instead, as dramatized in Maya Stovall’s Detroit-set Liquor Store Theatre, community is our church and art is what grounds us, what makes us who we are. As an introductory statement on its next phase of existence and its emergence as a flagship gallery for the art of the present, the MOCA has made its position known and given us good reason to have faith in what’s to come.

BELIEVE continues until January 6.
Museum of Contemporary Art: https://moca.ca/
The gallery is accessible.