Barbara Steinman at the Darling Foundry

Montreal is a city in flux. Last fall the Musée d’art contemporain de Montréal closed its doors for renovations, only to magically reopen them in the spring. Artists’ studios and ad hoc galleries are closing and new ones are opening further afield. While many artists and arts spaces are arriving at a moment of surrender to rapid fire “renewal,” the Darling Foundry, an arm of the Quartier Éphémère, is committing more than ever to remaining. Having recently received large grants from the Ministry of Culture and the Ministry of Economic Innovation, the arts space has launched a “No Funds, No Foundry” Indiegogo campaign to raise the final sum. All this acts as a dramatic backdrop to Barbara Steinman’s exhibition Diving for Dreams in the gallery’s Main Hall. 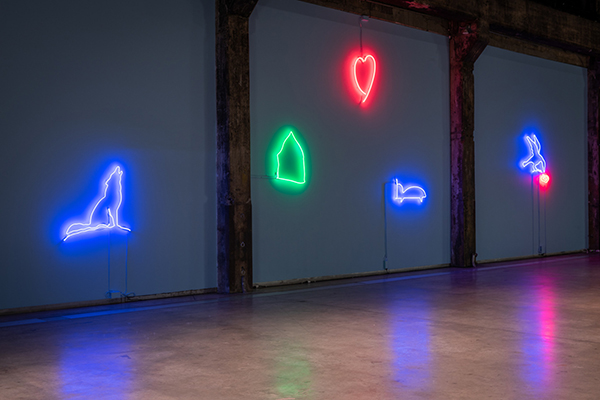 As a longtime resident of Montreal, Steinman’s international and national acclaim makes her one of the city’s own beloved art darlings and conceptually fitting for the task at hand: two icons thinking through notions of home and belonging at a moment when neither are a given. The exhibition is intentionally sparse; there are four works: Day and Night, an early series of photos encased in sculptural light boxes; Diving for Dreams, a series of neon drawings; Niche, a glass text-work backed by mirrors and burrowed into a pre-existing groove in the far brick wall; and Daring Others (Photo Souvenir), a postcard series takeaway. In her curatorial text, Ji-Yoon Han emphasizes Steinman’s spatial engagement with the voluminous Hall as one of “draw[ing] a perimeter and demarcat[ing] a territory’s limits.” The titular work Diving for Dreams is notated from an E.E Cummings’ poem of the same name, which, within the context of the exhibition’s larger framing, reads as a whimsical and optimistic anthem in the face of capitalism and its most dire, but currently imaginable consequences.

As with every time I enter the Darling’s Main Hall, I am first greeted by the space that is now positioned as a kind of sculptural centre within the exhibition’s frame. So I pay it special attention. The afternoon light pours in from floor to ceiling windows onto rugged brick walls and soaring beamed ceilings, a few fans circle slowly above, made small by their relation to the room’s immensity. Staged photos lean against perpendicular walls in two of the Day and Night light boxes. An itinerant figure is laying, sitting, or crouching on and within a bricked alcove, their identity obscured by shrouds, toques, or their own body. Inspired by Michelangelo’s tomb sculptures for Guiliano de Medici, the figure’s tragedy and beauty come across in equal measure. 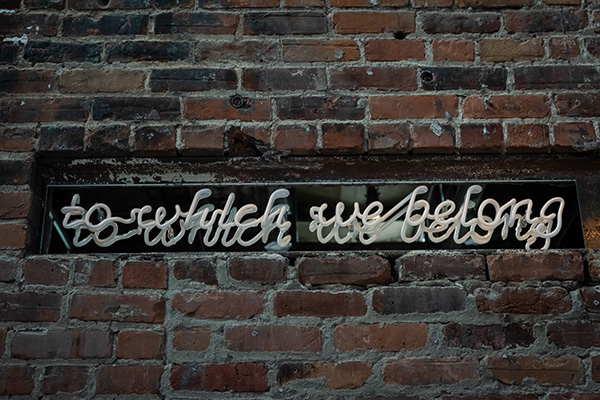 The alcove where the body rests in Day and Night is formally echoed in the space that Niche occupies at the far end of the gallery. Glass text, an inverted fragment taken from Charles Moore, reads, “to which we belong & which belongs to us.” The beautiful, itinerant body read alongside Moore’s inverted text implies belonging as an act of adaptability – one that might be spatial, but not necessarily dependent on space. The psyche of belonging is further excavated in Diving for Dreams’ five neon drawings: a howling wolf, heart, bed, house, and bird in mid-flight derived from an “open-ended collection of drawings” produced in response to the word “home.” In Daring Others Steinman recasts an image of the Foundry’s exterior as a postcard with minor edits so that “Darling Brothers” now reads as “Daring Others.” Here the image of the Foundry is dispersed with its public, its past branding merged with the present “here to stay” slogan.

Collectively, Diving for Dreams proposes at once an earnest, open ended investigation into notions of home and belonging, and a positioning towards their inherent fluidity. Her referents too are in constant flux; poetic citations in the titular work and Niche must submit to the realities presented by Day and Night and Daring Others. At the same time I can’t help but read the intentional “emptying” of the Main Hall as edging towards a furtive dis-ease-y-ness with occupation more generally. In her curatorial text, Han asks the questions: “Who is this we asserting its belonging to the Darling Foundry’s walls? What community is being evoked here?” I might edit this to ask: Who is the we asserting its belonging to the Darling Foundry’s centre? What community is being evoked here? And perhaps the bigger elephant in the room: who is being left behind?