Reflecting on Salt, a body of work from 2016,  Anique Jordan has said, it “wasn’t supposed to be a photo series. It was supposed to be a performance.”1 In those pictures, she situates a spectral representation of herself, wearing a typical white Caribbean housecoat, within a set of vernacular spaces considered to be sacred to her family’s history and home in Trinidad. Writing about this work at the time, I described its otherworldly air and how “she shines forth, as if possessed by a ghostly emanation…whose very presence serves to ‘assemble, testify, preserve’ difficult memories and realities that are ordinarily unseen.”2

It is three years later, and Jordan’s new work has taken an urgent – and galvanizing – turn. Distilled into a seven-note, three-part minimalist poem of a show at Zalucky Contemporary, Ban’ yuh belly3 is strong stuff. The first five images are crisp, stark, and dark, in contrast to the soft, velvety greys of Salt; the settings evoking history and home are gone, replaced by a featureless void that threatens to envelop her. She does not face us as she did before, she turns – the edges of her body, now in profile, seem to dissolve into the inky emptiness. This turn is devastating in its implications: when people become profiles, we all know what happens…. 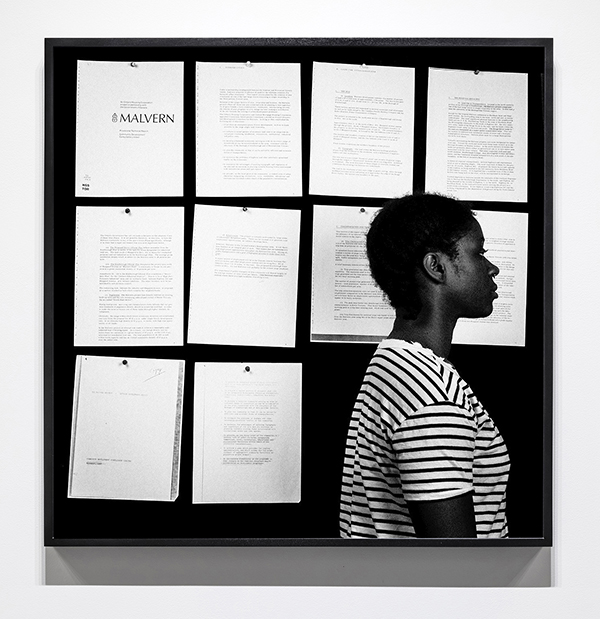 Not all people, actually – and so the artist kindly provides some unassailable evidence. Drawn from her exhaustive (and exhausting) fifteen-year archive of news clippings and social research, a set of carefully selected texts share the stage within Jordan’s black frames. Circumscribing her current home within the GTA and its ongoing history-in-the-making of assaults upon Black bodies and minds, these texts task the viewer with the work of understanding what Jordan already knows too well. It is difficult work, as she can attest, and requires close reading. In order to do so, we must reduce the distance between the artwork and ourselves, between our bodies, our lives, and hers. It’s our turn, she seems to say.

The texts speak for themselves so she doesn’t have to say more: trumpeting the Year of the Gun and Toronto City Council’s sea of whiteness; testifying to majority-immigrant Malvern’s origins as an underserved, stigmatized community within 1960s city planning policy-making4. The harrowing fourth image needs no words: titled Kloth, it enacts the transfiguration of Jordan’s white frilled gown and shining presence from her previous photo series into the fearsome spectre of hate that stalks Black lives to this day. In the fifth image, Jordan connects administrative policies to violent outcomes in a handwritten litany – the language of bureaucratic banality translated to psycho-physical pain. Zero tolerance policy. High risk category. Field information report. Priority neighbourhoods. Toronto teacher compares son to “crackhead.” TDSB Trustee “Nigger.” Murder at funeral. Six year old handcuffed. The mothers. “The myth.”

Afford us our madness.

The exhibition turns a corner in the gallery space. Here a single comparatively bright image holds the wall – unframed, it is a view into a small room, where the artist lays in a protective pose. Her back is to us; the turning away is complete. She has returned to a domestic space, but without any real specificity, it invokes an interiority that is equal parts physical and psychological. She rests; we rest. The “tense grammar” expressed in the previous images is relaxed momentarily, and it is in this moment, this break, that we recognize the exquisite precision of Jordan’s performance-through-photography.5 Through her effortful embodiment of mute stasis, she has achieved a difficult balance between multiple opposing forces: agency and subjection, hope and refusal, radicality and restraint. However, it is in its display and arrangement in space that the work becomes much more than what it shows and says, shifting the emphasis to what it does: its true power lies in how the artist moves the viewer, not just emotionally and psychologically, but physically, socially, poetically. We are compelled, propelled, and impelled to perform, experience, and respond in space and in body as well as mind. In performing the exhibition we enter into relation  with the artist. That is to say, we transcend viewership to be in relationship. And it is through navigating relationships that we are truly changed. 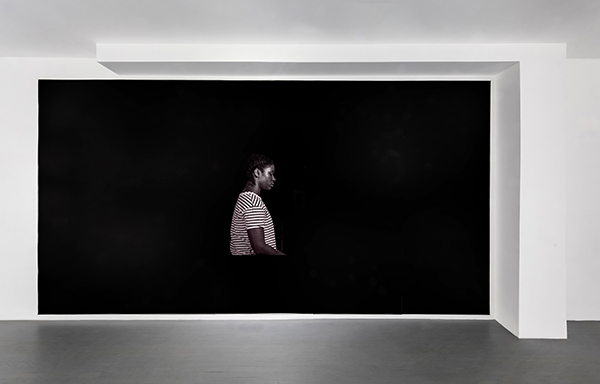 With the seventh and final image we close the circle, but the performance isn’t over. Fully encompassing the adjacent wall is an expansive black field in which the artist reappears, still in profile – a memory or emanation from the initial set of images. But no texts from that troubling archive accompany her, us, into this sanctified space. The proverbial slate wiped clean, we are invited to write new futures together within this place of pure potential. If “change is the process by which the future invades our lives,”6 and through being in relation, we make opportunity and space for this change, might we turn toward each other in that wild, prophetic place and ask ourselves: What new stories can we tell to overwrite these tired scripts? How do we move past these brutally uninteresting times? Can we forge a collective new poetry “not of ending, but of end, a poetry that is itself unmoving, [through which] we may actually move…. A poetry not of if, but of when?”7

Shani Khoo Parsons is an independent curator and founding director of Critical Distance Centre for Curators in Toronto. With degrees in architecture and design she has pursued a multidisciplinary, research-based practice within independent and institutional contexts and produced an eclectic body of work ranging from intimate artist’s books to immersive exhibitions. Curatorial projects include solo and group exhibitions featuring local and international artists working in all media, site-responsive interventions and installations in the public sphere, and thematic moving image programs bringing together eclectic and experimental films, videos, animations, music, and more.

1 What Haunts You: An Interview With Anique Jordan—Desmond Miller, No More Potlucks, 2016.
2 Proof 23, essay by Shani K Parsons for Gallery 44.
3 “Ban’ yuh belly” is a Caribbean expression meaning “Prepare yourself for hard times ahead, a time for belt-tightening” (from Grenada & Caribbean Slangs Facebook page).
4 Malvern is a neighbourhood within Scarborough, a community of Toronto where Anique Jordan grew up . See ‘It Hasn’t Gotten Better’ in Malvern, Kim Nursall for the Toronto Star, March 11, 2014.
5 This quote and references to “tense grammar” and “mute stasis” are drawn from Tina Campt, Striking Poses in a Tense Grammar: Stasis and the Frequency of Black Refusal in Listening to Images (Duke University Press, 2017).
6 Mark Fisher, The Metaphysics of Crackle: Afrofuturism and Hauntology.
7 Kevin Young, Deadism, The Grey Album (Greywolf Press, 2012).