I feel nostalgic in Saskatchewan-based artist Amalie Atkins’ where the hour floats. Or it could be that I am being sentimental. Or maybe melodramatic. It’s tough to differentiate between them. Her solo exhibition at the Art Gallery at Evergreen includes large photographs and videos set in infinite prairie landscapes. There is a narrative, but it isn’t stitched in a linear way. Under an endless sky, women on roller skates in uniform red dresses, elderly twins in a soft caress, and a mother and daughter pinning long braided hair onto a clothesline act out a surreal plot that captures both the strange and beautiful of the everyday. This is how the hour – how time – floats for women of the prairie crop vastness in Atkin’s interconnected world. 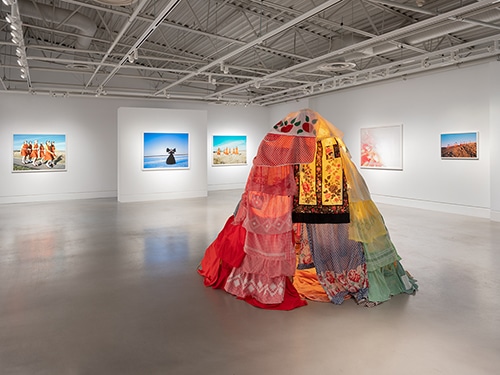 There are three photographs of a group of Ukrainian dancers. In one, we see them walk up a gravel trail. In the next, they huddle together with each wrapping a flower-patterned scarf around her body. In the final image, red material is draped around the group with only their long braids and flower headpieces peeking out the top. Ukrainian storytelling, costuming, and discipline are wrapped up in these images. I am carried back to a town hall in Yorkton, SK where we performed rhythmic interpretations of inherited Ukrainian dance sentiments and symmetries. This could be the nostalgic part.

Another video is set on Atkin’s family farm. We see the artist’s elderly aunt shelling peas and beginning to layer her sister with mounds of aprons made by their mother. A hut-like sculpture in the centre of the gallery is constructed from the same aprons. There is an absurdity to these visuals, yet also a familiarity. The homesteader generation relied on a strong female presence involved with a particular quotidian flow while the husbands worked the fields. My understanding of women and feminism was shaped in this domestic sphere. And as I stand in front of this video, I recognize my grandmother and aunts’ shared characteristics from my own family’s Saskatchewan farms. I think this is the sentimental part.

Known for its lush landscape, corners of darkness also undulate the Prairies. Each of Atkins’ works have ominous and eerie undertones. These inklings are caught up in the photograph of a woman standing in a snowy blue field wearing a long black dress and large black listening horns. In her witch-like costume she postures towards the sky and tunes into the past and the future. Maybe she holds the secrets to the darker side of Saskatchewan’s whimsical folklore? Is it that only someone from there could truly understand this exhibition? This is probably the melodramatic part.

Eastern European traditions permeate Saskatchewan and impact residents whether they are descendants of this lineage or not. Ukrainian communities in particular animate towns and hamlets throughout the flat rural lands. Two major waves of Ukrainian immigration took place before World War II: the first at the end of the 19th Century and the second just before the Great Depression. A majority were agricultural settlers and these immigrants were forced into a harsh living. Atkins’ exhibition is a fragmented glimpse into the specificities of the visual culture – including nuances that are both historical and traditional – of 1900s Eastern Europe and the Canadian Prairies. Its visceral sensibilities respect the mystical and touch on the rural authenticity of that Prairie soil. Porcelain skies, golden acres, the horizon line. Textured spaciousness and articulated pigments. The surface glow. A swell of warmth enfolds me.

Note: The works in this exhibition have been combined into a series of films that will debut at the Remai Modern in Saskatoon from April 5 to June 2.

Amalie Atkins: where the hour floats continues until April 21.
Art Gallery at Evergreen: https://evergreenculturalcentre.ca/exhibit/
The gallery is accessible.