The peach paint strokes of Alison Yip’s mural at Monte Clark Gallery are not vying for trompe l’oeil; however, the thinly rendered landscape manages to produce the urge to enter this place where water doesn’t fall from clouds but is instead poured from a plastic electric kettle. A coffee table with crimped legs and a checkered surface hovers over the stream that flows from its spout. The size and placement of the kettle in the sky subverts my irreverence of it. Its shape and sound are so familiar to be almost forgotten, but Yip has dislodged it from some far flung cognitive landfill where I deposit banal spatial experiences. 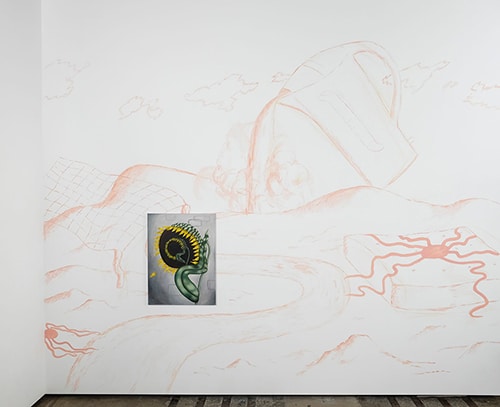 Across the boiled stream, a plump mattress has become the rest-stop for a flat, tentacled shape. Bearing no identifiably lifelike attributes, it’s uncertain whether this shape is animal or vegetation. Realism doesn’t really factor into this to leap to another logic, and so the question remains whether the shape is an “it” or a “they,” and if the boiled river might not burn it/they because such compositions defy registered sensations.

At approximately the same time last year, I reviewed a small group of Yip’s paintings in this exact space. They resembled thresholds with figures and flora as sentinels. Standing before this newly executed landscape, what anchors me in our dimension is a single medium-sized painting hung over top of it. This painting, portraying a sunflower against a stone wall lit like a poetry slam or amateur stand-up, is not meek or dwarfed against the mural. A sunflower’s distinct outline, with its slender body, leaves for arms, and big head, conjures the upright human form. The flower inspires an anthropomorphization that projects a face upon the round bed of seed florets. Yip’s sunflower seems to be resting or poised in thought, but rather than a face, the seeds’ surface hosts an image – like the surface of a crystal ball – of the same sunflower in its hunched, thinking pose. This Rodin sunflower, with the surreal capacity of The Arm, is a further textured sentinel that has the potential for the devious wisdom and peril we associate with the “becoming” sentient of a thing. Here, I am thinking of the insensitivity of the Venus flytrap in Little Shop of Horrors and its macabre bloom, but Yip is far less brutal.

Her rogue placement of these objects gratifies a desire for fantastical arrangements and a re-inscription of familiar surfaces, but it can’t offer actual escape. Even the composition that hovers over the wall like condensation, is barely there were it not for her bewildering and burgeoning iconography. Much like reading lush poetry that aggregates satisfying and unexpected phrases by the end of the poem, I hold the book in a world that contains the possibility for articulation, but where boiled water will burn and an abandoned mattress is likely full of demystifying bugs.