Alanis Obomsawin at the Montreal Museum of Fine Arts

Several flashy exhibitions opened this past month in Montreal, yet I was drawn to a small, dimly-lit basement space at the Montreal Museum of Fine Arts to spend time with Elder, artist, filmmaker, and activist Alanis Obomsawin for Alanis Obomsawin, Printmaker. The gallery has low ceilings and deep red walls painted to “commemorate missing and murdered Indigenous women and girls.” A looping audio track of drums, breath, and haunting vocals further sets the tone: “Heeeey! Bush ladyyyyyyyy! Commmme to the cit-y! Hey ho ha, hey ho ha, hey ho ha…” 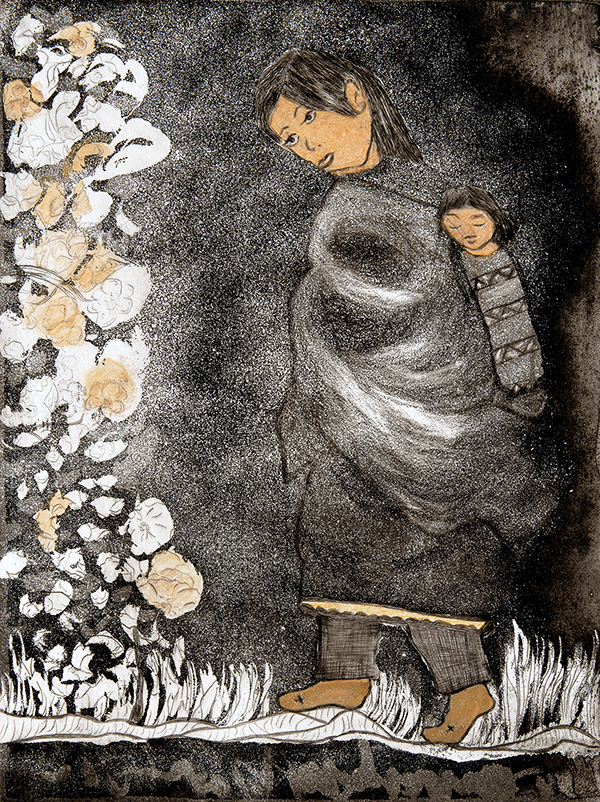 Alanis Obomsawin, Mother of So Many Children VI, 2004, drypoint and etching

Subtitled An Artist and her Nation: The Waban-Aki Basketmakers of Odanak, the exhibition is curated by Hilliard T. Goldfarb in collaboration with the artist and the Waban-Aki Nation. The first room is tightly hung with Obomsawin’s prints and incorporates a central display of baskets including one elaborately carved wooden rocking chair. Two prints (Thirteen Moons…She Who Walks at Night and Mother at Age Twelve), a beaded pouch and collar by Marie-Anne Nagajoie, and a photograph of Obomsawin’s family posing on the porch of an on-demand basket making business create an establishing shot for the exhibition’s dual (if somewhat underdeveloped) premises: the centrality of basket making in Odenak, Obomsawin’s printmaking, and her links to its basket making industry.

Following this sequence, we are presented with a cycle of fourteen prints from 1998 to 2004 all bearing the title Mother of So Many Children. The prints take up the repeating motif of a mother with a single child, sometimes in abstracted non-spaces, sometimes walking in the landscape or in more symbolic spaces where the line between domestic interior and outside environments is blurred. Mothers, Obomsawin emphasizes, were traditionally never separated from their children. This picture of the devoted mother makes the next sequence that much more painful – like watching a movie after reading the book. We know what happens next; we just wish it was different. A single, lonely woman wrapped in a blanket stands with only a bird suspended mid-flight in the three prints of What Happened to My Children. Thirteen faces of young boys peer out of Indian Residential School, 1934 in response. 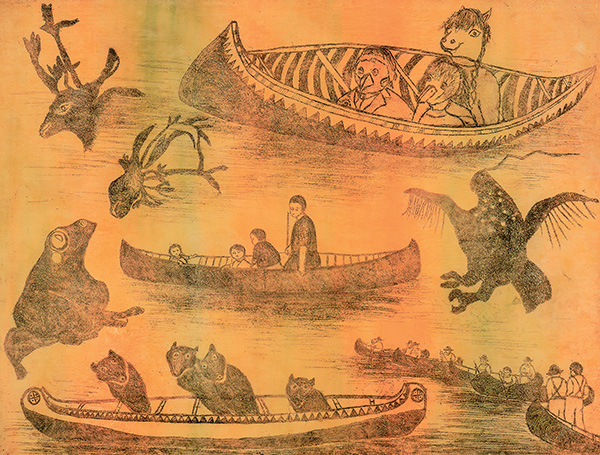 The second adjoining gallery shifts in tone, inviting us into Obomsawin’s internal, symbolic world where animals are close companions and guides. To my delight, having had a similar connection to animals as a kid, an entire wall is dedicated to etchings of horses that would appear to her in dreams, comforting and warning her. Horses were her allies and companions along with a myriad of other animals. The body of work collected in this first exhibition to focus on Obomsawin’s printmaking showcases a rich oeuvre. Stylistically it takes on surrealist qualities at times. At other moments the prints are reminiscent of ledger drawings, like in The Great Visit, where “people and their friends, the animals and birds, are gathering to celebrate the passage of the light.”

Of the laborious printmaking process, Obomsawin reflects: “friends would ask me how I could do hundreds of lines without getting bored…it was the opposite…the time I spend doing it allows me to really get into what I am expressing…”  While I initially found the curatorial drive to include basketry confusing, upon reflection I see a welcome parallel between the lines that painstakingly make up the whole of the basket and those that make up Obomsawin’s prints. Although I did not walk away with a greater understanding of basketry, what Alanis Obomsawin, Printmaker elicits is an intimate portrait of the artist that places her in a continuum of makers. We are presented with generous access to the internal symbolic world of one of our generation’s important storytellers who also personalizes some of the most challenging issues we are faced with today – particularly the ongoing genocidal practices towards Indigenous peoples.

Sarah Nesbitt is an independent writer and curator based in Tio’tia:ke (Montréal). Her writing has been published in esse + arts and opinions, PaperWait, The Eastern Door, Public Parking, and Border Crossings. She is co-curator of window winnipeg, a 24-hour project space in Winnipeg for 2019.