This is as much a goodbye as it is a review. Let’s start at the beginning, well actually 3/4 of the way through, in late October of last year. I had just returned to Montreal after working in Winnipeg for two years and Abbas Akhavan was opening his solo show Folly at Vie D’Ange, a defunct mechanic shop turned DIY gallery curated by Daphné Boxer and Eli Kerr. At the opening, conversation gravitated towards the gallery’s new neighbor: a looming concrete skeleton that, while structurally beautiful in its rudimentary state, was devastating in its implications as the future home of Microsoft and Artificial Intelligence agencies. In April Vie D’Ange hosted a Spring Reading organized by Loretta Lamargese and Rosemary Flutur. During a break I asked Eli, “What’s next?” He discussed some plans for what would likely be a final show, but nothing was confirmed. In mid-July, their Instagram account announced that the inevitable finally happened: the building has been sold and would soon be demolished. The pronouncement of the fated demolition was paired in dramatic crescendo with the reveal of their closing exhibition: Condemned, a solo show with a solo work, Condo 88.9, by Toronto-based artist Alan Belcher. 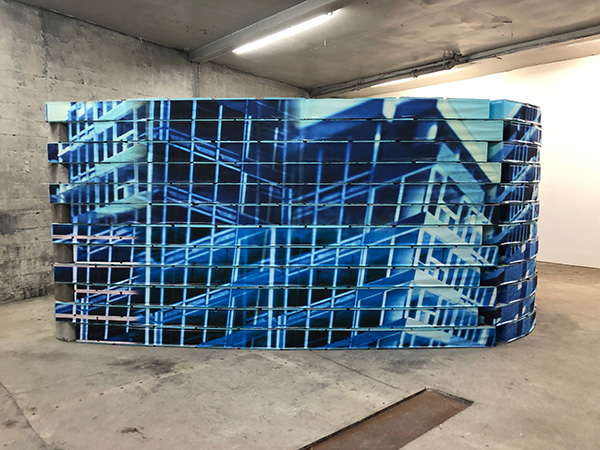 Condo 88.9 is a photo-sculpture that “revisits and updates a significant work from Belcher’s Condominium series” initially created in 1987/88 and shown in New York, Los Angeles, and Geneva. A pointed comment on  “the generational and spatial reproduction of free market urbanism,” it is constructed from 348 cinderblocks forming a tightly contained oblong architectural space that you cannot enter but can see inside through gaps in the block on block construction. The sculptural front is assembled from a large colour mural photograph, sliced along lines defined by the cinderblocks, “laminated” with scotch tape, and hot glued in place. The photo is highly saturated, mostly monochromatic blue. Originally shot on film, the artist projects and rephotographs it “to exaggerate perspective and induce vertigo.”

It wasn’t until I stepped back to document it with my cell phone that the lines sharpened and unified into a fully formed subject: a distorted bisection of an empty condo. The vertigo I experienced was not so much a physical sensation as a temporal one, induced by the material and contextual translation from small format film to large format sculpture, and from 1980s Harbourfront to the newly invented “Mile Ex” neighbourhood in Montreal. One of the formal aspects that struck me was the spaces between the bricks. These small gaps provoked in me a desire for interior access reminiscent of the way I feel about windows on high-rises – the ones police are mandated to protect when students or anti-capitalists protest, and that certain bodies are taught early on are not for them – that are made for one-sided vision, but also represent the inevitable leakage that even capitalism cannot control, as private spaces are necessarily unable to escape public gazes. 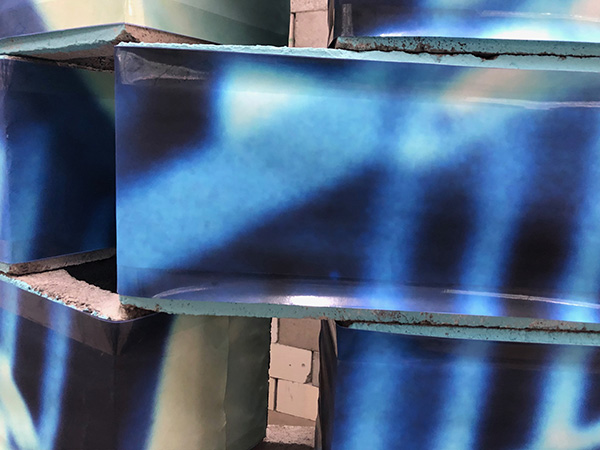 Condemned and Condo 88.9 conjures histories of one gentrified/fying city, summoning the spirits of urban transmorphism. Whether a cautionary tale or a white flag of surrender, Condo 88.9 is a decisive marker of a moment everyone knew was coming. Creating in these precariously precious spaces of transition has its benefits – like living acutely with the threat of death. For those who have gathered, lived, or worked in this neighbourhood, the end of Vie D’Ange is just another step in the road of urban “progress.” Most of us who have formed memories and community around the garage-cum-gallery were not intimately connected to the spatial histories of the displaced mechanics, who were also likely disassociated from the histories of those displaced before them, and so on. And the next cycle of loss and creation is on the brink of beginning. 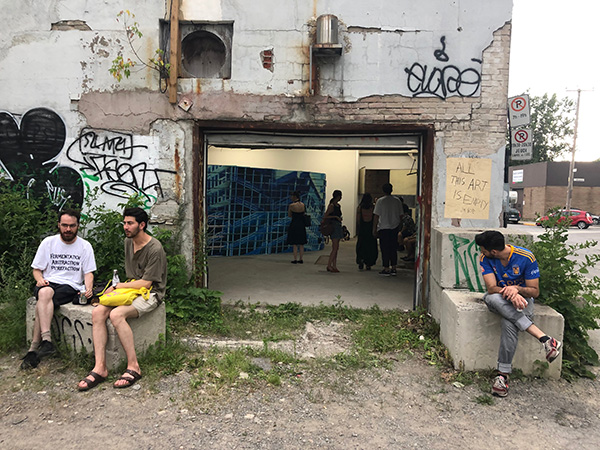 This morning I woke up to my social media account flooded with images coming out of Winnipeg where a warehouse used as artist studios in the city’s North End was decimated by fire, and, as I later learned, on the same day Israeli soldiers were aggressively tearing down yet more Palestinian homes in the West Bank, and last week Kanesatake Mohawks of Oka were again confronted with racism after a developer “gifted” a piece of the embattled Pines back to them. Though unique and specific contexts, these losses reverberate with one another as reminders that urban space is constituted precisely by loss and dispossession, as living relics of colonial imperialism. Although it shouldn’t be surprising that the “‘slow violence’ of dispossession” theorised by contemporary geographers like Rachael Pain continues to ravage our cities, the loss is still real. Condo 88.9 punctuates this latest loss materially and conceptually. With its used cinder blocks, sourced by the curators from city demolition projects, the artwork will remain in-situ to be demolished along with the building.

Alan Belcher: Condemned is open to the public Saturdays from 1-5pm with no determined end date.
Vie D’Ange: https://www.viedange.club/
The gallery is not accessible.

Sarah Nesbitt is an independent writer and curator based in Tio’tia:ke (Montréal). Her writing has been published in esse + arts and opinions, PaperWait, The Eastern Door, Public Parking, and Border Crossings. She is co-curator of window winnipeg, a 24-hour project space in Winnipeg.