Àbadakone at the National Gallery of Canada, Ottawa

Àbadakone is the second in a series of international Indigenous art exhibitions that was inaugurated in 2013 with Sakahàn. With reference to the fact that the National Gallery of Canada resides in traditional Algonquin territory, both exhibitions have titles in Algonquin. As Sakahàn is a word that means “lighting a fire” in English, it is totally apt that Àbadakone should mean “the fire continues to burn,” or in the trilingual title of the exhibition: Continuous Fire. This exhibition further establishes the NGC as a centre for dialogues that contribute to the writing of international Indigenous art histories. It also makes it a place to see some extraordinary contemporary Indigenous art from around the world, with work by more than seventy artists from at least sixteen diverse countries including Benin, China, Guatemala, India, Indonesia, Japan, New Zealand, Russia, and South Africa. Significantly, these artists in total identify with approximately forty Indigenous nations, ethnicities, and tribal affiliations within and across the countries listed, traversing boundaries and shifting a visitor’s understanding of the global map. 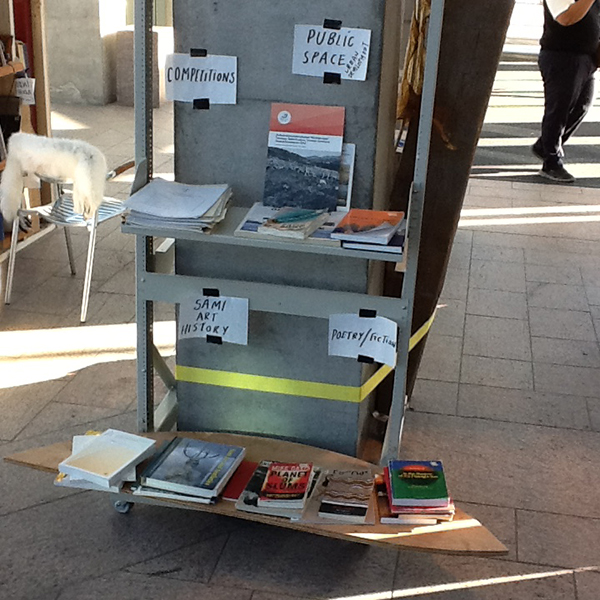 One work that is particularly emblematic of this shift in perspective is the Sámi Architectural Library by Joar Nango, a Sámi artist and architect from Sápmi (a cultural region that stretches over Norway, Sweden, Finland, and Russia). For the exhibition, Nango has made an architectural intervention at the main entrance to the NGC, using, as the didactic panel inventories, “repurposed construction materials, books, hide, bark, fish skin, [and] natural materials” to fashion a welcoming pavilion that houses a library. Four main wooden beams form a tower that is bolted together at the pinnacle and secured at the base with ratchet tie-down straps to the existing concrete columns in the foyer. Within this structure an enclosed platform is suspended to create spaces above and below for the display of a collection of books on Sámi architecture.

Nango’s work embodies the concept of what he calls “Indigenuity,” which reflects Indigenous peoples’ ingenuity in responding to the lived experience of their environment with the materials at hand. One section of the library includes a stack of picture postcards of improvised/vernacular architecture and/or “life hacks” found in the North. In one example, a vacuum cleaner mouthpiece is used as a door wedge. This improvisatory methodology is carried over in the construction of the pavilion itself and the cheeky incorporation of materials found on site, such as leftover vinyl banners from previous exhibitions in the “Non-Art Storage” area of the gallery, or brought indoors from the landscaping outside like the large rocks that provide extra seating when stabilized with wedges of wood. 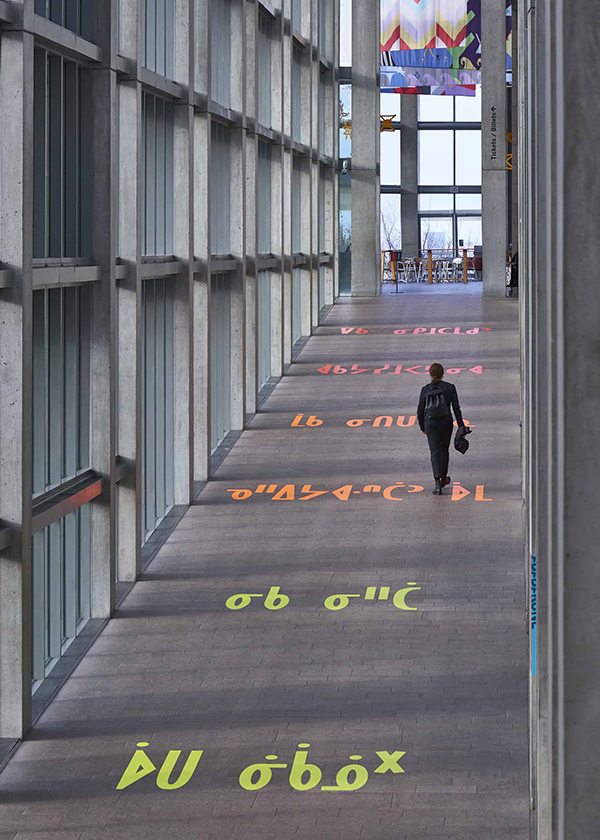 For Nango, the paramount goal is the transmission of Indigenous knowledge. The construction of the library provided such an opportunity, including demonstrations of the tanning process. Hides that were tanned on site were used to make book covers, telegraphing that knowledge is contained on both the inside and outside of these books. Sections of the library (such as Nomadism/Temporality or Decolonial Theory) are identified by handwritten notes, with revisions that suggest the collection is constantly being updated. Recent additions, found in a bird’s nest on the second level, include AA Bronson’s A Public Apology to Siksika Nation alongside a copy of the Truth and Reconciliation Commission of Canada’s Calls to Action. The Resistance/Activism section includes Audra Simpson’s Mohawk Interruptus, which critiques the assumption that the colonial project is complete. If anything, Nango’s library offers a dynamic model for decolonization.

Of course, this is a lot to take in, but viewers are encouraged to browse and spend as much time as they would like with the materials. It helps that the work is situated in a public space of the NGC for which there is no admission charge. As a primer for the rest of the exhibition, it offers the perfect vantage point on the next work, Joi T. Arcand’s ᐆᑌᓃᑳᓅᕁ (ōtē nīkānōhk), a text piece in Day-Glo vinyl on the floor running the length of the Colonnade ramp leading into the main galleries. From the enclosed platform on the upper level of Nango’s pavilion, Arcand’s work is fully legible – that is, if you are literate in Plains Cree.