This year will forever be remembered as one many artists and cultural works in Winnipeg were left asking a heavy and crushing, “Why?” What arose in the aftermath of this impossible question is how the same community stepped up to see each other toward a new future. On July 22, the city-block-sized warehouse that served for decades as a studio and production site for many in the city burned down to ashes along with archives, collections, artworks, and, for some, their entire livelihood. This seismic “Why?” and whatever answer there is to give has undoubtedly left its mark and, as we turn a corner onto a new decade, it serves as a guide forward rather than a paralyzing end. The wads of cultural output the city saw this year provides a capstone to a decade of vertiginous highs and lows, critical storytelling, and discovery from a community continuously challenging how we experience art and by whom. More importantly, what we saw also forecasts the many possibilities to come. The following picks index a larger and richer landscape of artist-run centers, curators, organizers, thinkers, and makers who put forth what they do best so we can pause, reflect, and go back into the world differently than before, however slight.

The 2010s was the decade in which we saw the advent of Instagram. A virtual platform which in a lot of ways added a new brand of cognitive dissonance with the way we consume images and the artworks that are often trapped in them. These three exhibitions demanded that we experience them aside from the clutter of screen images. This is especially true for Nest…a hiding place in the sky, a sound and sculpture installation at aceartinc. this past winter by Kelsey Braun. His exhibition did not only appeal to the ear or call up an auditory physicality; it tested the possibility of sound to activate psychological responses from the viewer. Woven together by gestural rustling noises, airy ambient sketches, ricocheting feedbacks, and field recordings, the tapestry left you with an enveloping, shapeshifting atmosphere that continued to wander in and out of focus depending on where you were. The kinesis of sound that filled the gallery spilled over and glided into the hallway and stairs as you made your way into the space. Braun has a way of tracing out sound textures to illustrate something that can be felt and perhaps seen in the mind’s eye. You become highly cognizant of the surrounding architecture and labyrinthine spaces inferred by the sound. The sculptural fragments that dotted the gallery only made this that much more vivid, transporting you to a wider interior terrain beyond what is readily available to the eye. 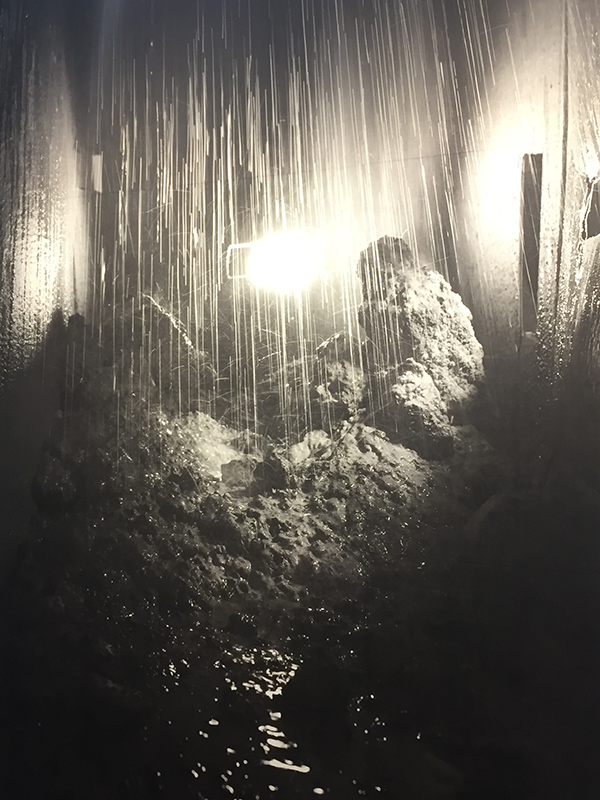 Angela Snieder’s Obscura also teased our sense of sight and required that we do a double-take on what she was showing us in her chine-collé photopolymer prints and camera obscura projection at Martha Street Studios this past fall. At a time when we continue to be flippant and passively accept images as they come, Obscura slyly played tricks on our perceptions. Snieder’s photos of what looks like caves or desolate landscapes present themselves as one thing, but upon closer inspection show us the seams of their own making. The artist is adept at blurring the border between the innocuous ingredients (screws, twigs, bits of crumpled paper, cardboard, etc.) through which she fabricates her image-worlds. With each view, she reminds us of the half-lies photographs tend to tell us. 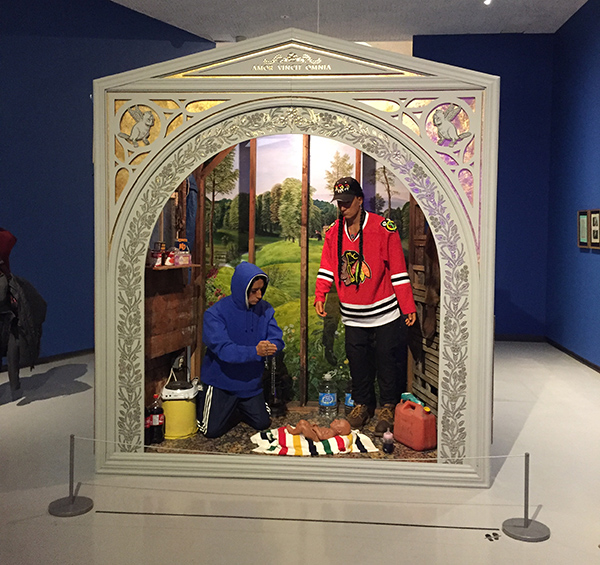 Quite possibly the most granular and fiercely maximalist ecosystem of an exhibition the Winnipeg Art Gallery has presented in some time if ever, Kent Monkman’s Shame and Prejudice: A Story of Resilience rampaged through art history with vindictive swagger and a wicked sense of humour. A reissue for his hometown crowd, this multi-chapter operatic saga was initially made for and showcased during Canada 150. But if you weren’t in Toronto when it was first presented, then you wouldn’t have experienced it. Two years on, what Monkman laid out in sharp detail breathes with more vitality and determination in its new context of Winnipeg – a city that fueled the latticework the exhibition contains. Scenes from his paintings are straight out of streets in the North end of the city. Dioramas give a direct side-eye to the ones he grew up seeing at the Manitoba Museum. The section of the exhibition on the forcible transfer of children is tangled with the story of his own grandmother’s experience of residential school. The section on incarceration pokes at one of the endemic injustices First Nations communities in the city face today. Monkman draws our attention over and over again in layered intertextuality to the ways the nation’s colonial past isn’t a past, but instead a weighty and foreboding present subjugating the same people it has always kept under watch. The damage and darkness are here, and there isn’t an easy out. The artist never wades too far into identity politics, nor does he chafe against the tropes of the traumatized subject. Instead, in his generous hands, everything is presented with a wink as he sashays with cinematic grandeur. Even if you leave the exhibition with only the delirious splash of it all, nested inside is an artist standing at the center of two opposing histories, constantly putting them in conversation.